Country: San Marino, Republic Of San Marino
Capital: San Marino
Currency: Euro
Numeric code: 978
Alphabetic code: EUR
The tiny Republic of San Marino (61 sq km), located on the lands of the Apennine Peninsula. Bordered it with the only state of Italy, since it is located inside of it. The most serene Republic of San Marino (literal meaning of the name of the country) is the oldest state in Europe. It was formed in the year 301, and managed all the years of its existence, to maintain its independence.
San Marino with a "first wave" has joined the Euro zone. It happened in 2002. Since then, the Euro, which equals one hundred cents, is the currency of 32 thousand citizens of the country.
Before in the territory of the state was used sanmarina Lira, consisting of hundreds of cents. In the catalogue of the coins of San Marino to the time of transition to the Euro was only of the lyre: 50, 100, 200, 500 and 1000. Interestingly, the banknotes in the country in General is not produced. The value of the coins of San Marino nominally equal to the value of the Italian Lira, but because sanmarina Lira was freely made to settlements in Italy and the Vatican and their money, respectively, went to San Marino.
The first coins of the country – 5 centesimi (1864) and 10 centesimi (1875) made of copper. They lasted not long, and soon (1894) had been withdrawn from circulation. To buy historical coins of San Marino only serious collectors. But later samples are quite affordable: the price of the coins of San Marino of the late twentieth century is very reasonable.
In 1898 saw the light of a new denomination: 50 centesimi, 1, 2, 5 lire. In 1931, the mint, the ruler of the country was extended 10 and 20 Lira, and in 1935, the 5 and 10 centesimi. Trifle again existed only for three years. In 1972 purses San marincev enriched with 50, 100 and 500 Lira, and in 1978 200 Lira. 1000 lire coin has closed range in 1997. 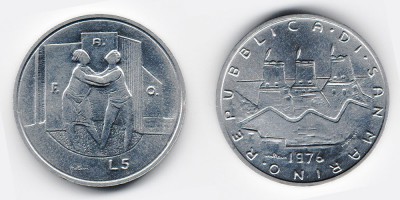 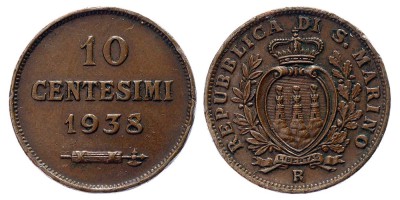