Country: Nicaragua, Republic Of Nicaragua
Capital: Managua
Currency: Cordoba
Code number: 558
Letter code: NIO
On a narrow territory, reclaimed land from the ocean, connecting North and South America, fit a few small States. Republic of Nicaragua, with the leading city of Managua – the most extensive among the Central American countries. She got 129.4 thousand square kilometers of land overlooking both the Caribbean and Pacific coasts. Inhabited the land of Nicaragua quite loosely in the Republic of just over 6 million citizens.
Córdoba, equaling one hundred centavos, is Nicaragua on the financial scene since 1912. In the catalogue of the coins of Nicaragua with the first release were: ½ , 1, 5, 10, 25 centavos and 1 córdoba. The ½ centavo production ceased in 1937.
The value of the coins and banknotes of Nicaragua to the 60-th years of the twentieth century was battered by inflation. The price of the coins of Nicaragua is rapidly declining. The catastrophic situation did not improved a revolutionary upheaval. Civil war, not slow to begin, made it impossible to buy coins in the Republic of Nicaragua anything. With the notes came easier: in the previous sample was just advectively more impressive values.
Finally, in 1991, the Nicaraguan currency denominated, by entering new – gold Cordoba. In 1994, wallets Nicaraguans got 5, 10, 25 and 50 centavos, in 1997, 1 and 5 Cordoba, in 2007, 10 córdoba. Updated coin catalogue of the country is now composed of these values. 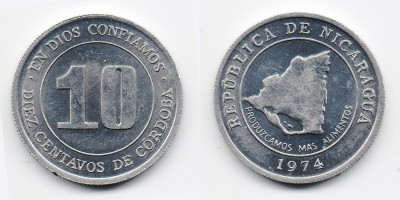